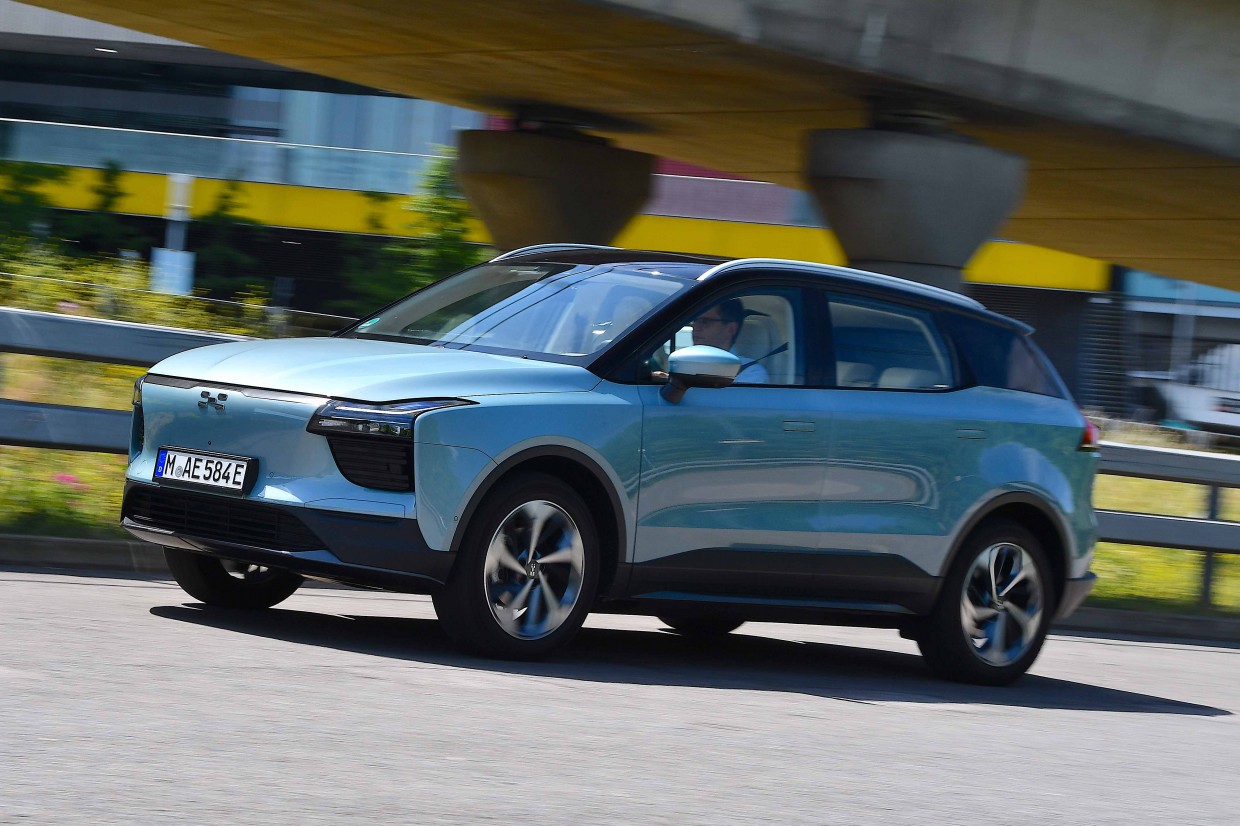 Sell it to me in a sentence...

You’re going to have to help us here…
Aiways - pronounced i-ways - is a Chinese start-up founded in 2017, looking to take advantage of the once-in-100-years switch to electrification to build a global brand.

I bet Google loves that name?
If you can resist spellcheck turning it into Airways, it’s certainly unique. The Ai part of the name comes from the Chinese word for love, which is sweet. 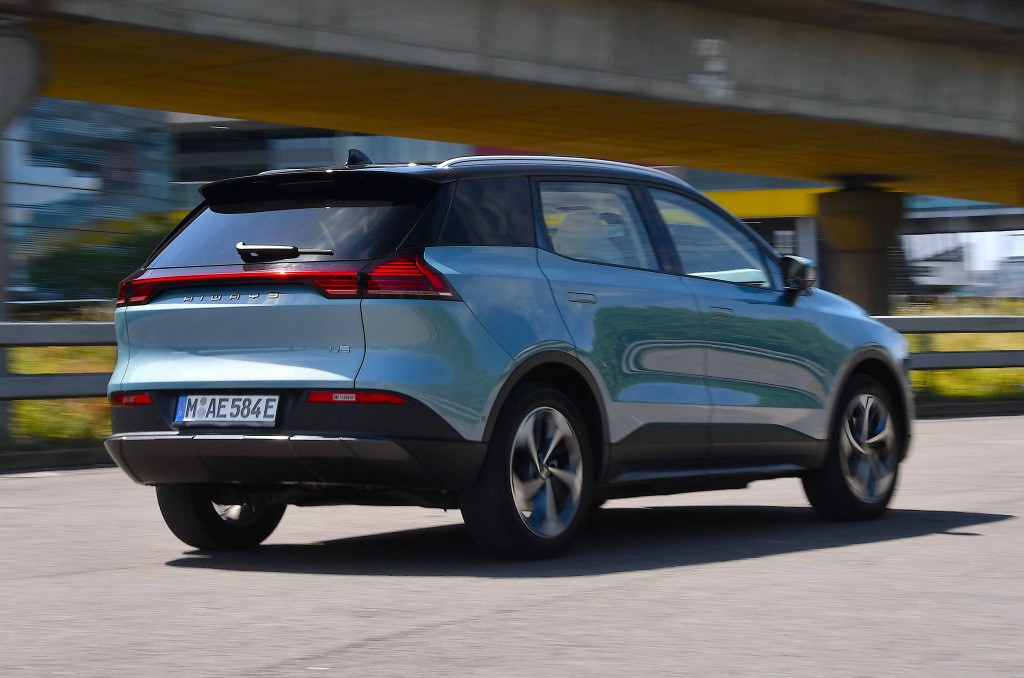 Will I, er, fall in love with the Aiways U5?
Keep an open mind and you might do. The rather uninspiring U5 designation may not give much away, but this is a family SUV to compete with the likes of the Kia Niro EV, Hyundai Kona, MG ZS EV and, if you’re feeling generous, Audi Q4 e-tron.

How’s it going to wow me?
It majors on space, tech and an asking price that is highly competitive, all of which adds up to a package that has its own place in the market.

The only watch out we’d give up front is that, while its available in 14 European countries as well as China, it isn’t yet on sale in the UK. However, plans are afoot to engineer it for right-hand drive markets in around a year’s time, and our exclusive test drive was undertaken on London’s roads.

Let’s go. Tell me more about the Aiways brand?
Founded as a start-up in 2017 by ex-Volvo sales chief Sam Fu Qiang and his partner Gary Gu, the firm has already built a plant with a capacity for 300,000 vehicles, a full R&D centre and a battery factory. It’s fair to say it’s ambitious and well-funded.

It’s smart, too, partnering with a number of blue chip automotive suppliers from the start as it focused on building cars to meet international expectations. The roster includes chassis specialists Bosch, battery experts CATL and renowned parts supplier Lear.

Nor does its ambition end at selling the U5 around the world; there’s a full roster of cars being prepared for sale, including more SUVs, a  five-door coupé and even a high-performance sports car.

The Aiways U5 certainly looks a bit different?
Fair comment, although to our eyes its appeal varies according to the angle you look from. While the front feels a bit derivative, and the sides reflect the fact it has a long wheelbase and capacious interior, the rear looks genuinely interesting. The net result is a car that has presence, if not, we’d argue, sheer beauty on its side.

How big is big?
Roomier than many of its similarly priced rivals. Legroom in particular is substantial, with limousine-like levels of space front and rear, and more than enough room for three adults to sit comfortably in the back, something helped by the fact the U5’s floor is totally flat.

The front seat passenger can also enjoy business class levels of room thanks to the decision not to fit a glovebox. While it makes the dash look a touch insubstantial, it opens up more space nicely - and if you must have somewhere to put your stuff (the owner’s manual is all online and accessible through the infotainment screen) then you can option a smart laptop sized bag that neatly hangs on hooks set into the opening.

None of this comes at the expense of boot space, which is a generous 496 litres and 1619 seats down - around 10% more than the Kia Niro EV. Recent updates also mean the rear seats now fold flat, improving its usability no end. 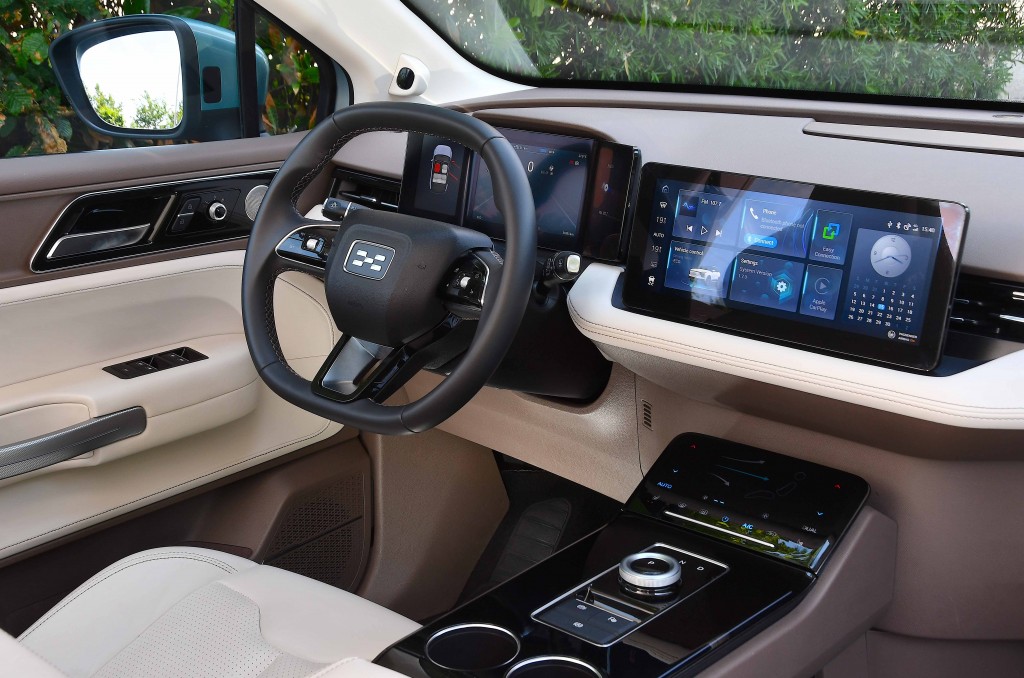 What about the quality?
Early U5s were criticised for being short on high-end materials, for using swathes of leather that looked like plastic and plastic that was dressed up to look like metal, all of which served to fuel stereotypes about Chinese attitudes to quality.

But this latest model seems to have changed that. Sure, lower down there’s still some materials selected for durability above all else, but in a car that’s likely to have to manage the rough and tumble of family life that seems reasonable enough. 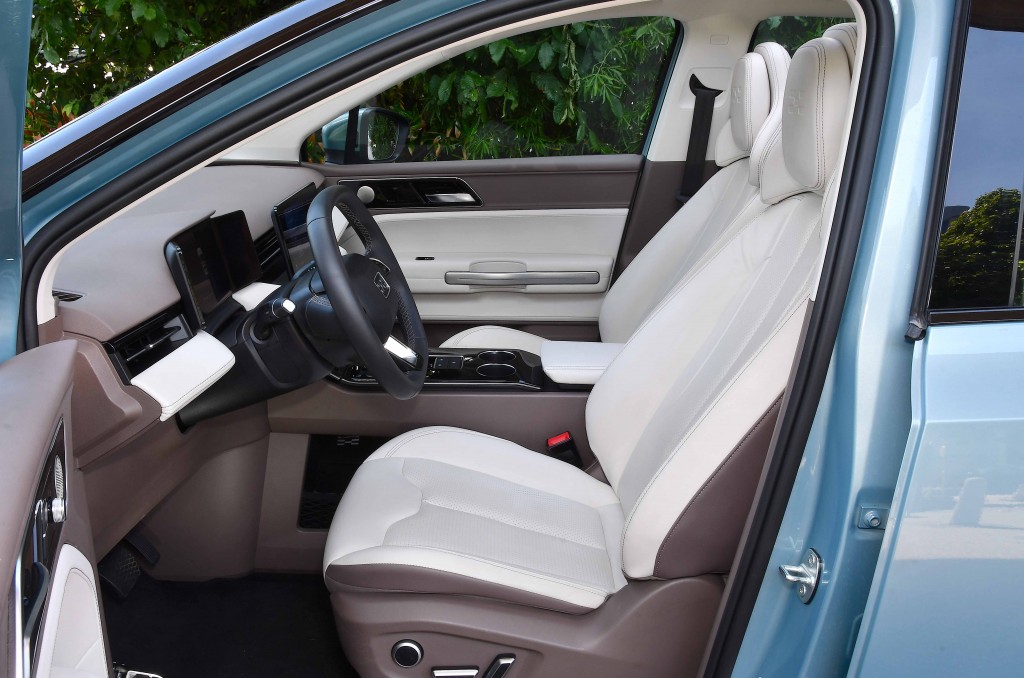 You mentioned tech, too?
We did, and there’s no question that Aiways is looking to exploit China’s position as a world leader in connectivity and infotainment - but not at any cost.

So, yes, the U5 can receive over-the-air updates in the same way a Tesla can, and there are a few tricks up its sleeve, such as the fact that you can only turn the car on and off by pressing on the touchscreen (no key to turn or button to thumb).

But there’s also a refreshing honesty to the set-up; Aiways won’t, for instance, sell you a sat-nav, because it knows that the phone you carry around will give you access to better resolution, more up-to-date mapping than it could hope to provide. That’s one reason why the price is so low compared to rivals.

What it will sell you, however, on a small monthly subscription, is access to an app that includes live traffic updates, live charger information, including locations and availability, and more. 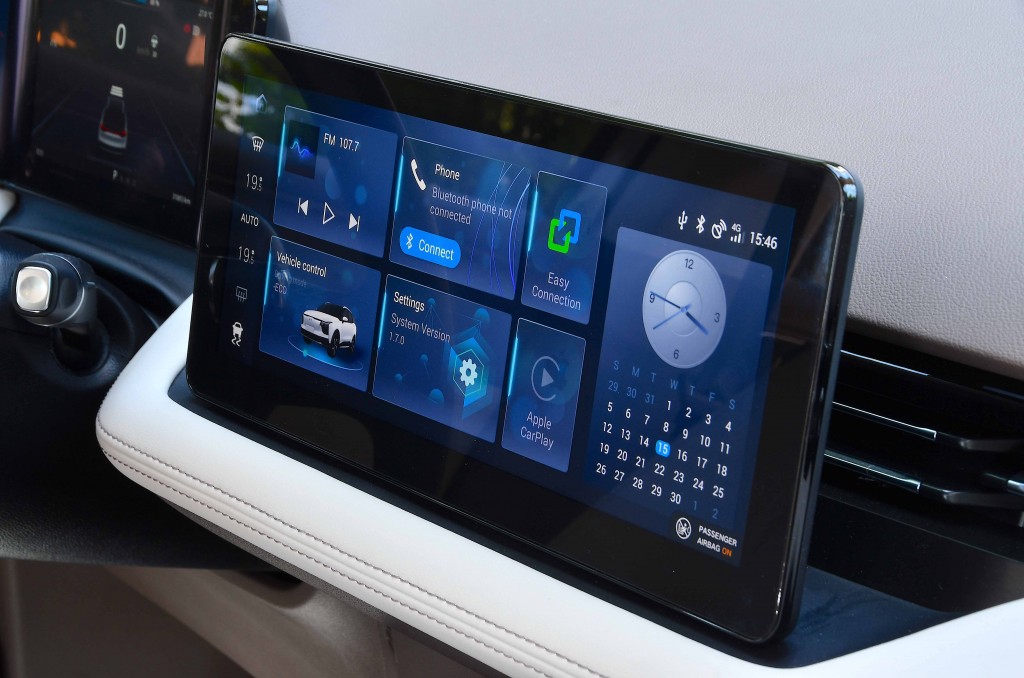 How else do they keep the price down?
In the words of its executives, the U5 was designed from the ground up to be an electric car, giving it an advantage over rivals who have had to modify combustion engine focused designs. As such, they put battery efficiency at its heart, allowing them to get relatively decent range from a smaller (and therefore cheaper) pack.

So it is that the relatively modest 63kWh battery is able to deliver 249 miles of range according to the latest, toughest tests. On our urban and A-road focused drive it was true to its read out, although as always anything above about 60mph will eat range. This is one reason why the U5 is limited to 99mph, although unless you plan to sit on German autobahns for extended periods it’s hard to know why anyone would complain.

Charging via a 50kW DC rapid-charger takes it from empty to 80% in little more than 40 minutes.

All this sounds great, but how does the U5 drive?
Maybe it’s because Chinese roads are similarly rutted and potholed, because the U5 - almost entirely unchanged mechanically from its Chinese spec - coped with the worst we could throw at it admirably.

Yes, it wallows a bit in the bends and the steering feels a touch light and some degrees away from being crisply precise, but overall it offers a straightforward, comfort-orientated drive. It strikes a decent balance between comfort and control. Yes, there are some compromises and rough edges, but for family life it’s likely okay.

Performance is also on the right side of enough. As with all EVs, acceleration from a standstill is instant and initial acceleration brisk. Progress is quiet, too, with road and wind noise damped and the whir of the electric motor only audible if you really listen for it. 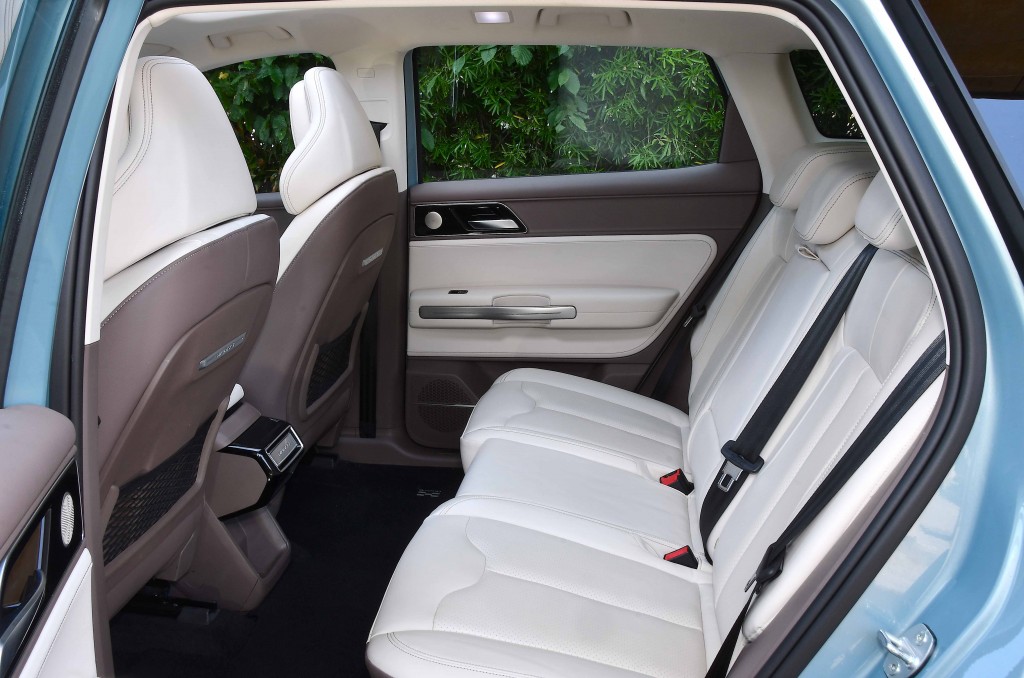 So far so good, but is it really as good as the opposition?
It depends what you consider to be the opposition. Priced right, it will be more than a match for the latest launches from MG, including the shorter-range ZS EV, which is probably the target audience where it will get most cut through.

But it also makes a case for itself against the Kia e-Niro, Hyundai Kona, Nissan Ariya and Skoda Enyaq. While it is shades worse to drive and short of finesse, it has space and price in its favour. Try it and you might find it is a closer competition than you might think.

The Aiways U5 won’t necessarily set your pulse racing, but it certainly offers enough to warrant your consideration, and after a test drive likely enough to make you consider your priorities a bit more carefully than you expected.