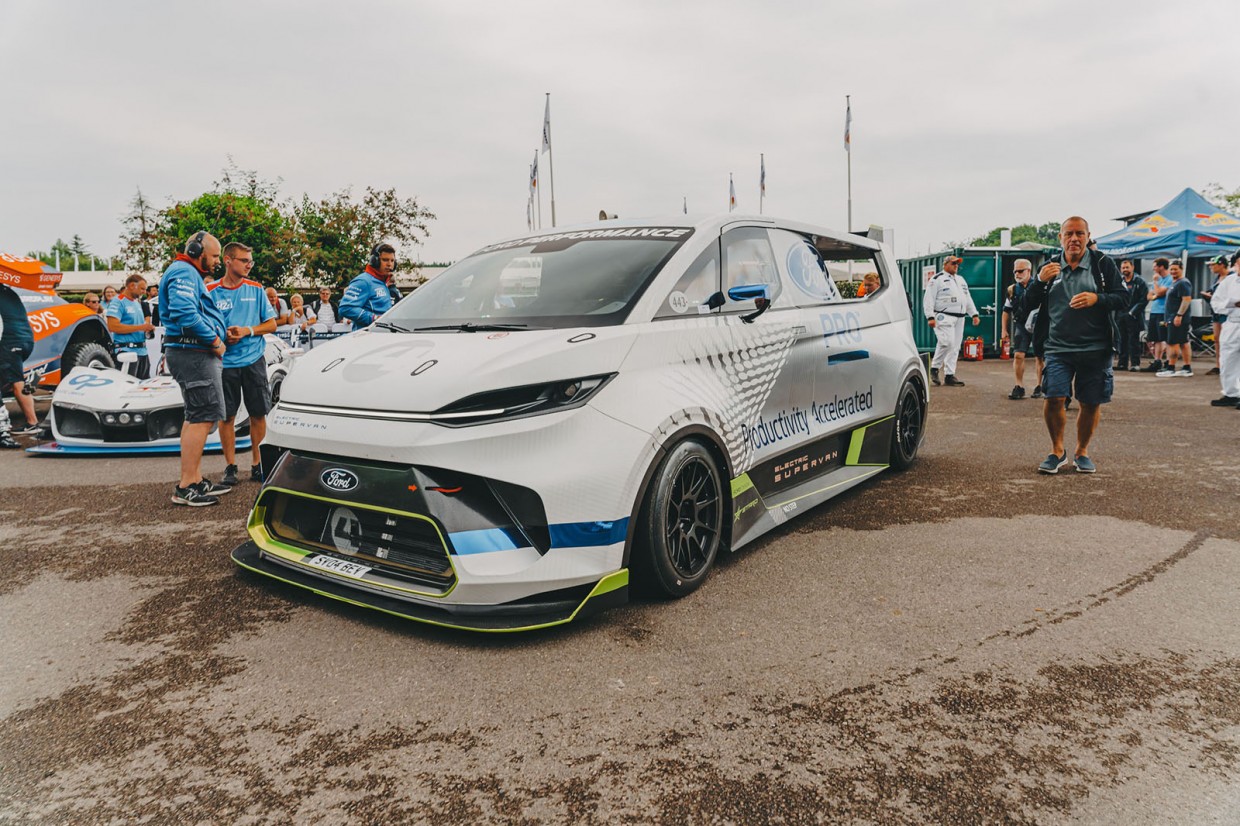 Ford has revived its SuperVan concept for a new generation – with a bonkers reworking of the Ford E-Transit Custom powered by a wild 1741kw (1973bhp) electric powertrain that uses four electric motors. Yes, it’s a big van with more power than an electric hypercar.

Now, while this might sound like the ultimate weapon for Amazon drivers looking to speed up their emission-free deliveries, the new Ford Pro Electric SuperVan is a one-off demonstrator out to showcase the firm’s electric technology.

Fittingly for a machine with a 0-62mph time of under two seconds, the machine made it's first appearance at the Goodwood Festival of Speed – where it shattered the record for the fastest van to ever take to the 1.16-mile hillclimb.

Driven by Romain Dumas, the SuperVan tackled the course in a ridiculous 46.58 seconds, crossing the finish line travelling at 138.9mph. That was the sixth fastest time in the Goodwood Sunday Shoot-out, and was only 1.08secs slower than the second fastest car on the hill, the electric Porsche 718 GT4 ePerformance racing concept. 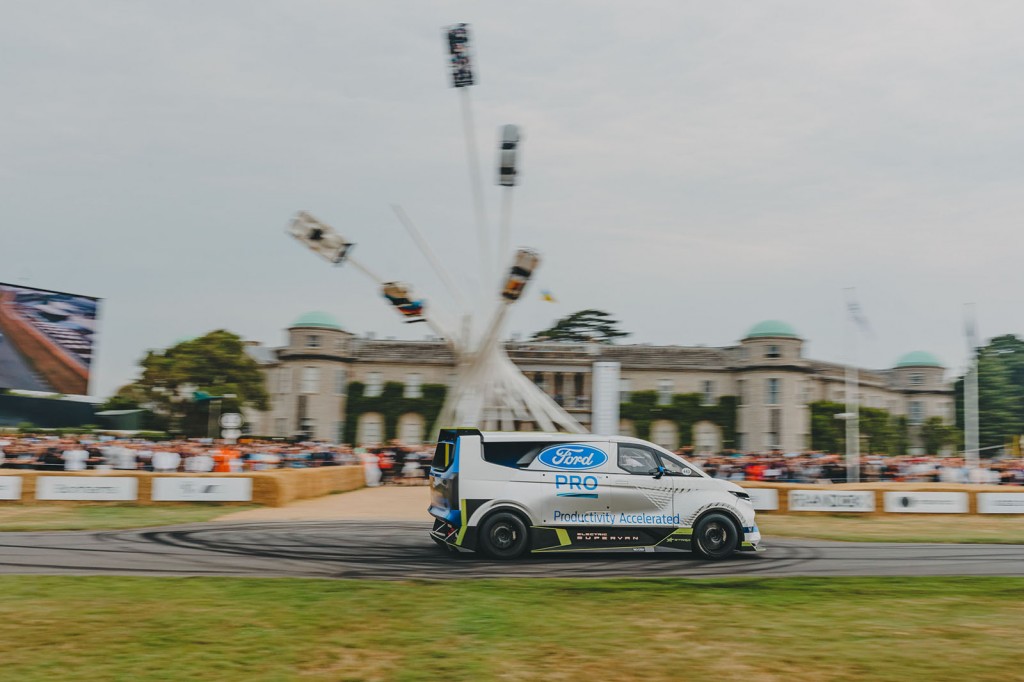 The new Ford SuperVan has been developed by Stard, an Austrian electric rally specialist, with the exterior design work done by Ford’s design team in Cologne, Germany.

Ford’s designers set out to create a “wild-looking vehicle”, with Ford of Europe design chief Amko Leenarts saying that the machine is “the absolutely pinnacle of Transit design language”.

The bodywork has been honed for aerodynamics, with a dramatic front splitter, side skirts and a motorsport-style rear diffuser, along with an enlarged cutaway in the rear section and a rear wing to generate more downforce. 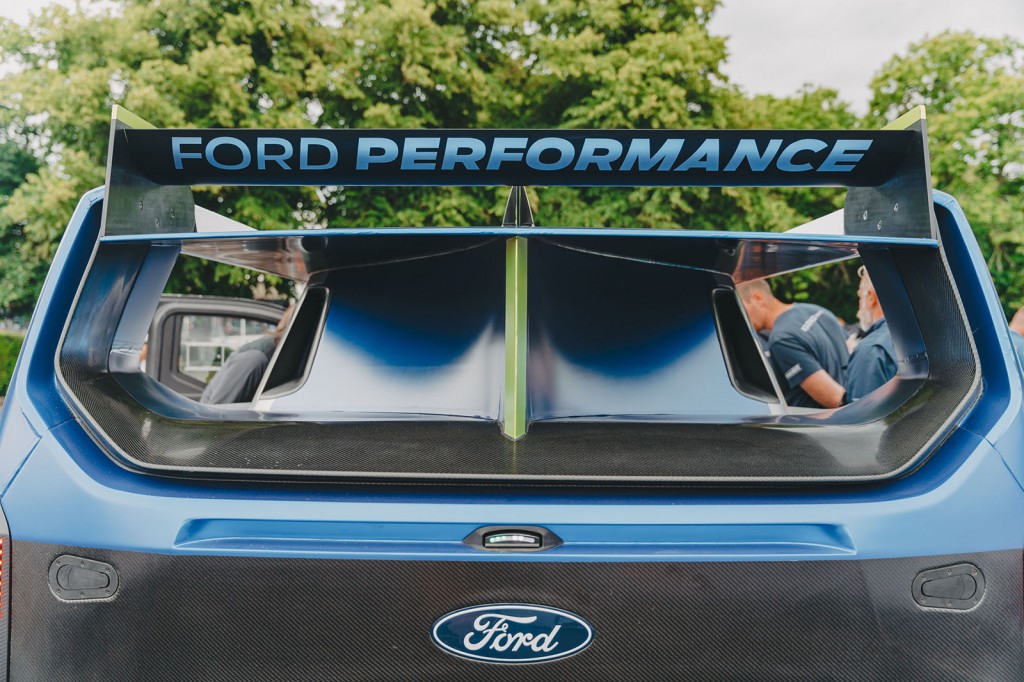 The machine is based on the floorpan of an E-Transit Custom, but with a new steel space frame and lightweight composite body panels. 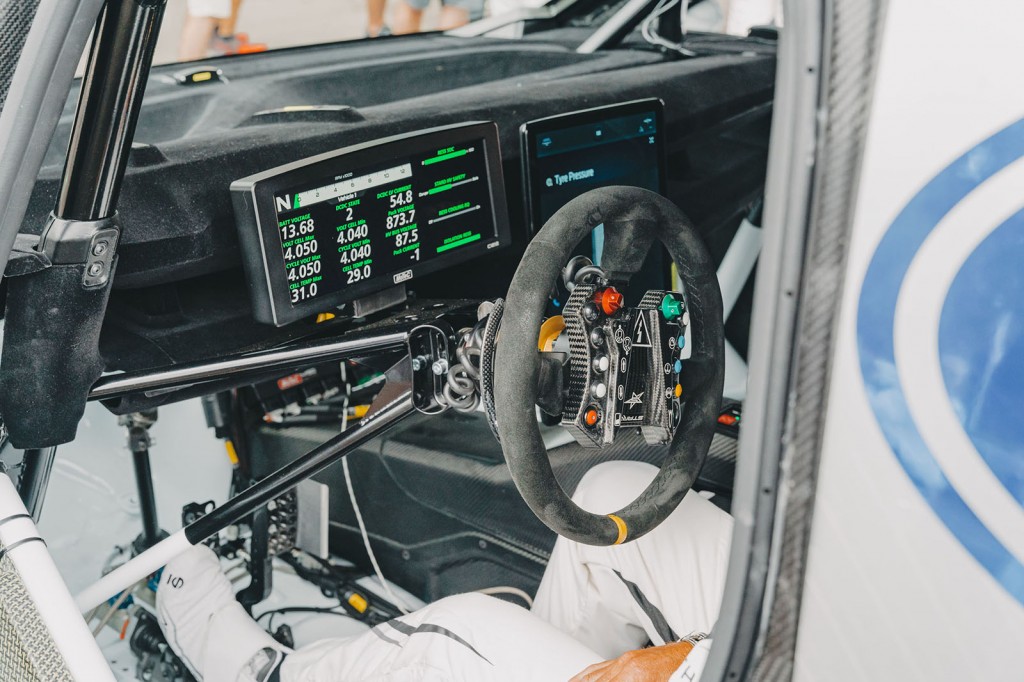 Power for the four electric motors comes from a 50kWh bespoke liquid-cooler battery pack, which the firm says has been mounted for optimum weight distribution. Ford hasn’t given any efficiency figures, although you can imagine how quickly it will drain that battery if you decide to use all 1741kW. Thankfully, Ford says that a full charge takes just 45 minutes on a standard electric vehicle fast-charger. 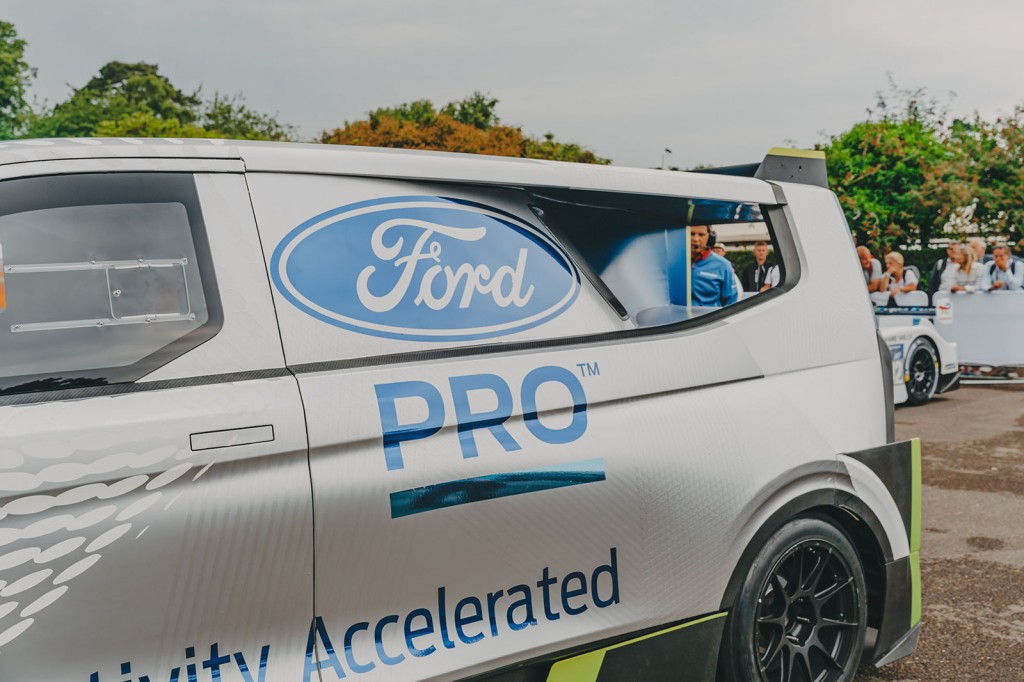 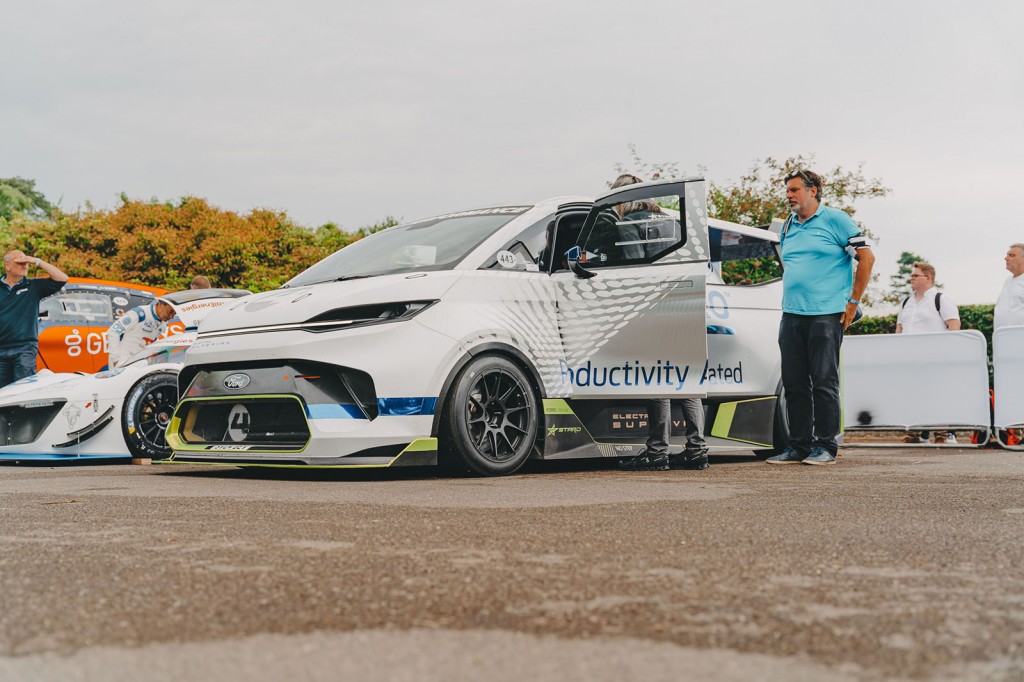 There’s also a low-speed Eco mode, a pit lane speed limiter and three levels of regenerative braking. There’s even a special Tyre Cleaning Mode, which effectively brakes one axle while spinning the other, which helps clean and wam tyres before runs. And, as an added bonus, makes it easy to do burnouts.

For safety, the SuperVan has a full FIA motorsport-spec roll cage built into it, and it also has real-time data software so that engineers can monitor and control settings remotely. And for fun, there are a range of cameras built into the bodywork so that action from it can be recorded for videos. 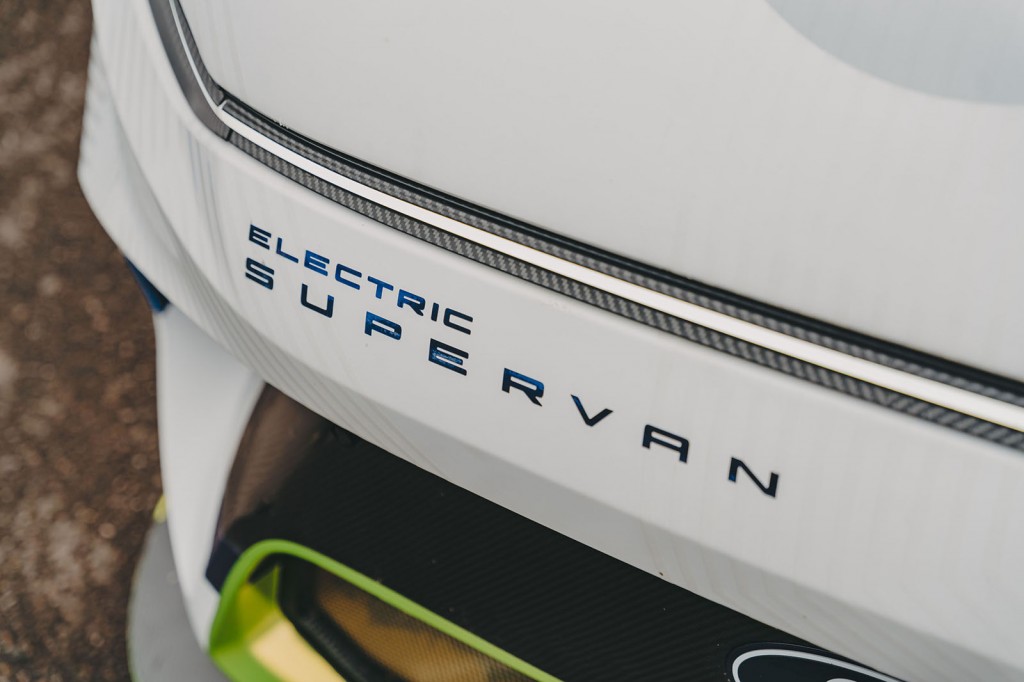 While the SuperVan is a largely bespoke one-off creation, there are some elements carried over from the E-Transit Custom, including the in-cab Sync touchscreen.

The first electric SuperVan follows three earlier high-performance Ford vans that have drawn on Ford’s motorsport heritage. The original SuperVan was launched in 1971 with a mid-mounted engine from the Le Mans 24 Hours-winning Ford GT40. SuperVan 2 used a glass fibre body and a Cosworth V8 taken from Ford’s C100 endurance racer. Then the SuperVan 3 used a Cosworth HB Formula 1 engine.

One major advantage the SuperVan 4 has over its predecessors: while the mid-mounted performance engines in those cars filled up much of the van’s rear, the new Electric SuperVan still features a loadspace behind the driver.

Frenchman Dumas drover the SuperVan at Goodwood. He’s no stranger to going fast in electric cars, thanks to his efforts in the Volkswagen ID R: he holds the outright course record on the Pikes Peak International Hill Climb, and previously held the Goodwood hill record until it was eclipsed by the McMurtry.