Sell it to me in a sentence…
The Hyundai Kona Electric is the battery electric version of the Korean firm’s hugely versatile crossover, which is also offered in petrol-engined, hybrid and performance N versions. 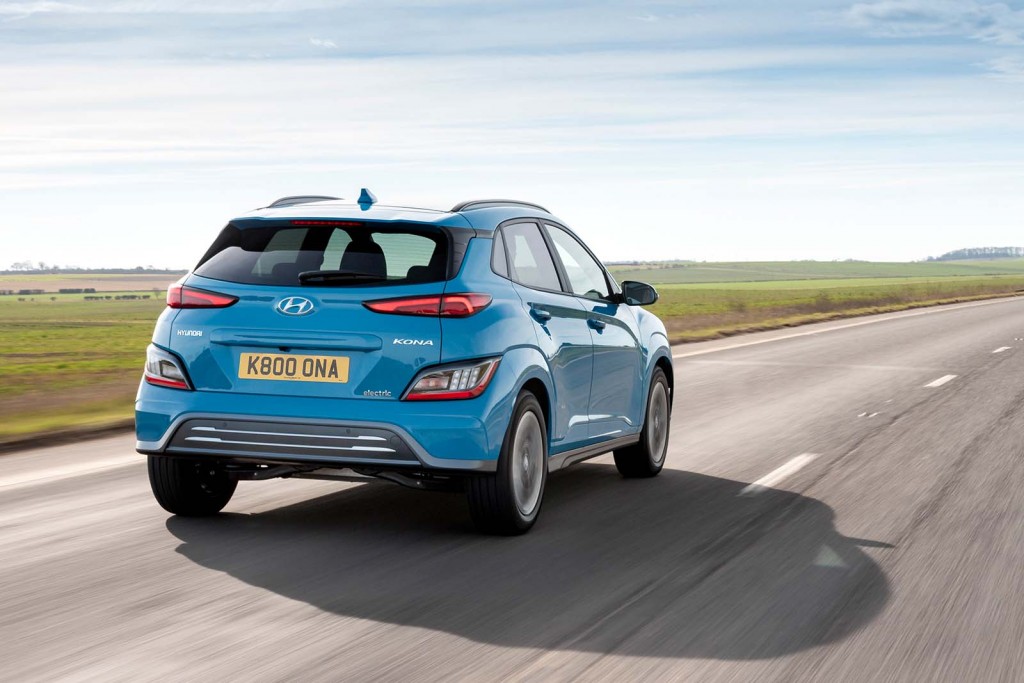 I’m interested, tell me more…
With an official 300-mile range the Kona Electric gives its internal combustion engine siblings a run for its money. Some naysayers would suggest that it couldn’t possibly match the range of a petrol car, but under real-world driving conditions you can expect to get around 270 to 280 miles of range from the Kona’s batteries.

By repurposing its ICE model into an EV, Hyundai has avoided overcomplicating the Kona Electric. Its simplicity and sheer normality is what makes it standout, and that is no bad thing if you’re swapping to an electric car for the first time. 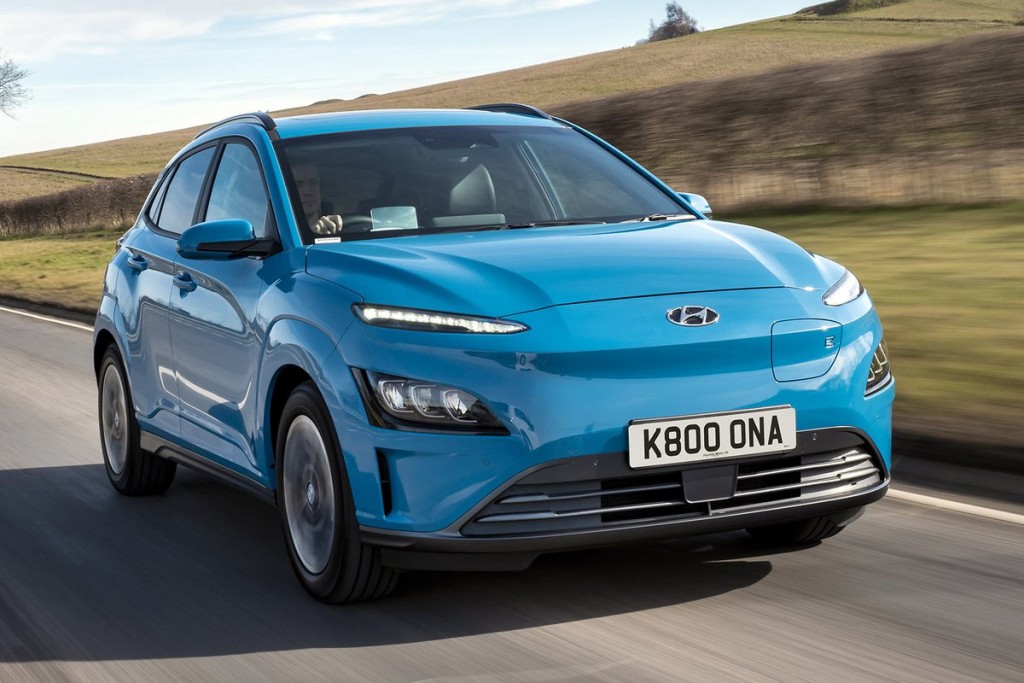 Numbers time: hit me with the range stats…
The Kona Electric range is pretty straightforward with the Korean brand offering two battery options. Buyers have a choice of a 39kWh or 64kWh unit, delivering a range of 189 and 300 miles respectively. We’d opt for the 64kWh variant as, even though it comes at a higher starting price, its range is a real standout – it’s better than the closely related Kia e-Niro, which we rate very highly. That range is also streets ahead of crossover rivals like the Mazda MX-30 and Peugeot e-2008. 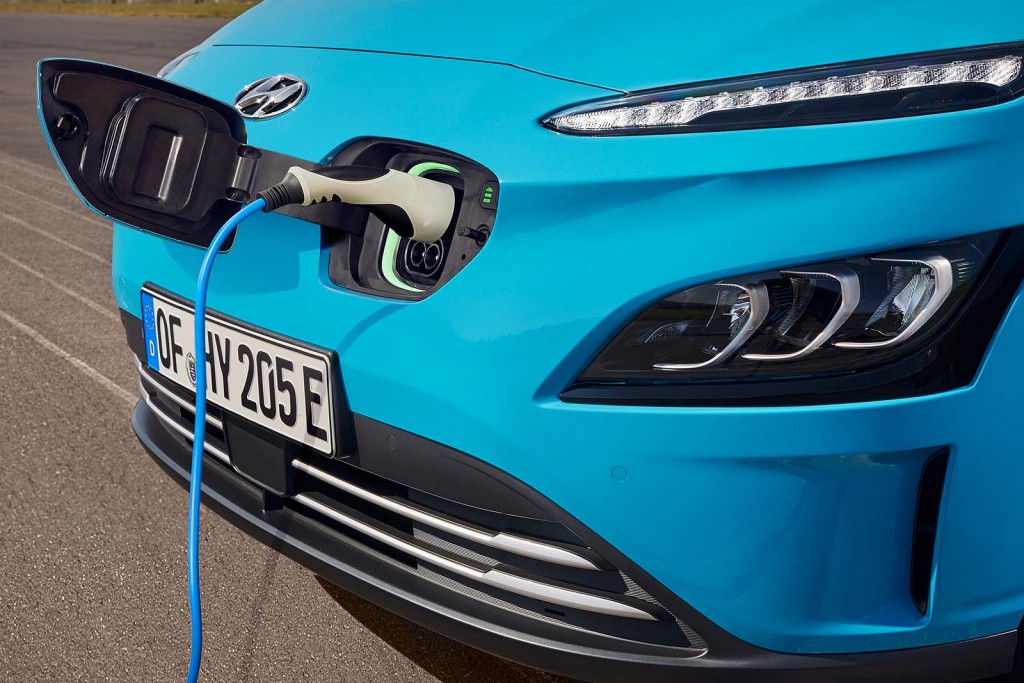 Charging the Kona Electric using a regular 7kW home charging device and Type 2 cable would take around nine hours for the 64kWh model, while the 39kWh version would be replenished in six hours.

Using a 50kW public charging device you can expect to charge the 64kWh variant from 10-80% in just over an hour. Those who opt for the 39kWh model can recharge in around 47 minutes using the same charger. The 64kWh model can be charged at 100kW allowing owners of that can to charge from 10-80% in 48 minutes. This is all very appealing, but what’s it like on the road?
Beyond its admirable range and size the Kona isn’t just an EV capable of taking on a long journey, it's pretty spritely too thanks to its entertaining acceleration figures. On paper a 0-60mph time of 7.6 seconds for the 64kWh model doesn’t sound special, but behind the wheel the Kona can easily put a smile on your face due to its willingness to break traction when launching briskly from standstill, especially in the wet. Sure, the 39kWh variant isn’t as wild but is still a nippy little car that provides more than enough entertainment.

The Kona Electric is equipped with regenerative braking which harvests energy that would normally be wasted to recharge the car's batteries. Drivers can also adjust the level of regen using the paddles on the steering wheel, with the maximum setting capable of bringing the car to a halt without using the brake pedal. 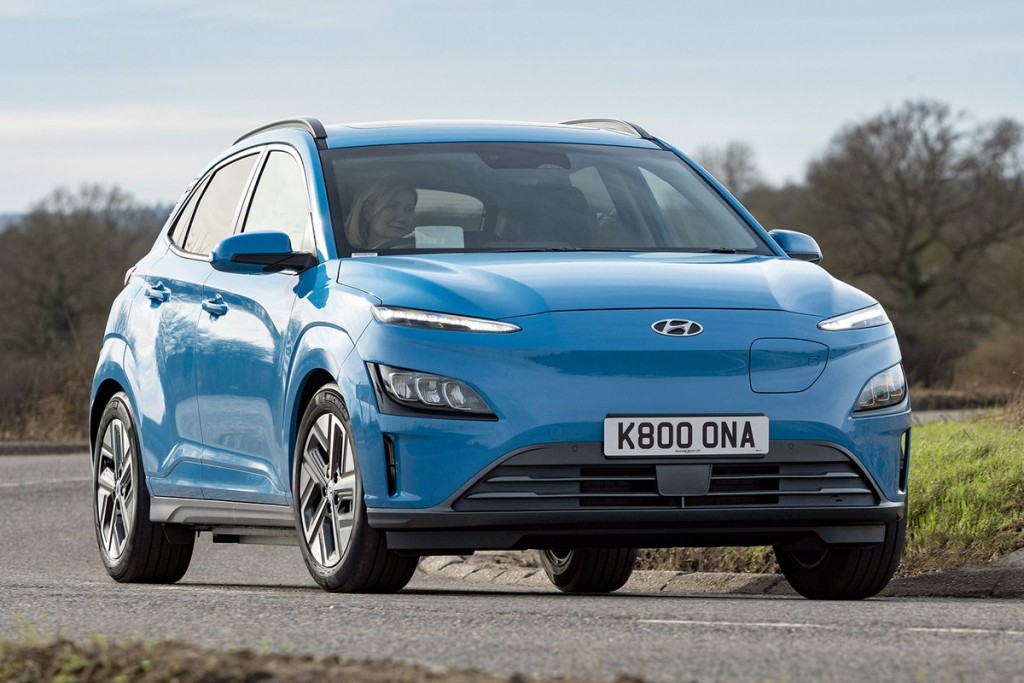 Through the corners the Kona Electric has less body roll than the Nissan Leaf or MG ZS EV, but at pace it feels less planted than the Volkswagen ID3 and e-Niro. Both handle better than the Kona thanks to a more accurate steering set-up, providing you with more grip when driving more exuberantly.

The Kona is less comfortable than its rivals too and can jostle you around even on roads with only minor imperfections, which can become a bit irritable when travelling on a long journey.

Road and wind noise increase when travelling at motorway speeds, with less intrusion than there is in the Peugeot e-2008.

And on the inside?
The interior of the Kona Electric is more like a pack of ready salted crisps than a fancy flavoured variety such as prawn cocktail, with the quality of materials being reasonable rather than remarkable. 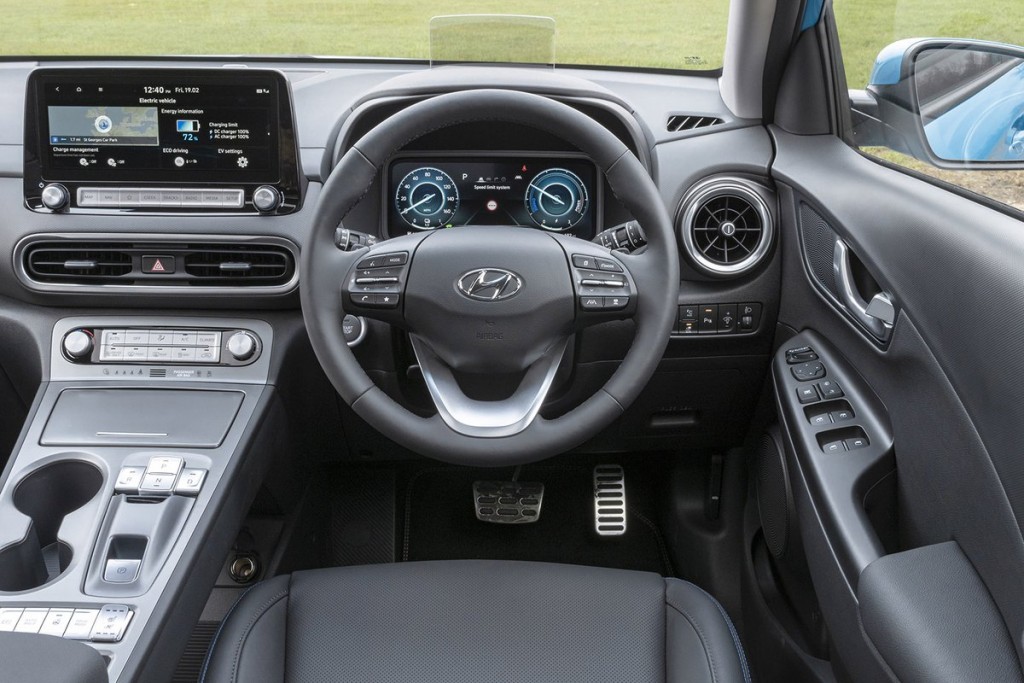 The e-Niro feels more expensive, as does the Peugeot e-2008. The Kona Electric does feel more refined than a Vauxhall Mokka E, but some of the materials such as those used on the seats and steering wheel lack that premium feel, and some of the metal-effect plastics may leave you feeling more disheartened.

Sitting pretty in the middle of the dashboard is a 10.3-inch touchscreen which houses the Kona’s infotainment systems which is very easy to use. It comes with all the modern mod-cons including Apple Carplay, Android Auto and satellite navigation as standard. The system is much better than the one found in the Nissan Leaf which is somewhat dated and is less complicated to navigate than the ID3’s systems. 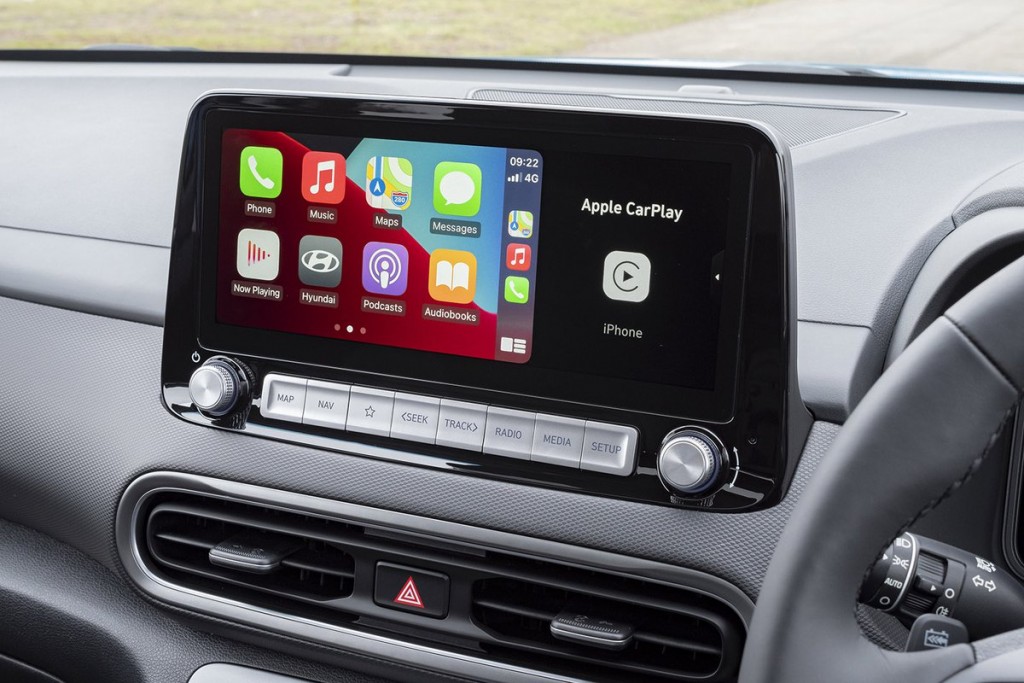 Behind the steering wheel is another 10.3-inch digital dash which is clear and easy to read. If you opt for Ultimate trim you benefit from a head-up display which is also easy to read while on the move.

The Kona Electric also benefits from its use of conventional buttons and knobs, which make it far easier to control things like the climate control than on the touchscreen-focused Volkswagen ID3. 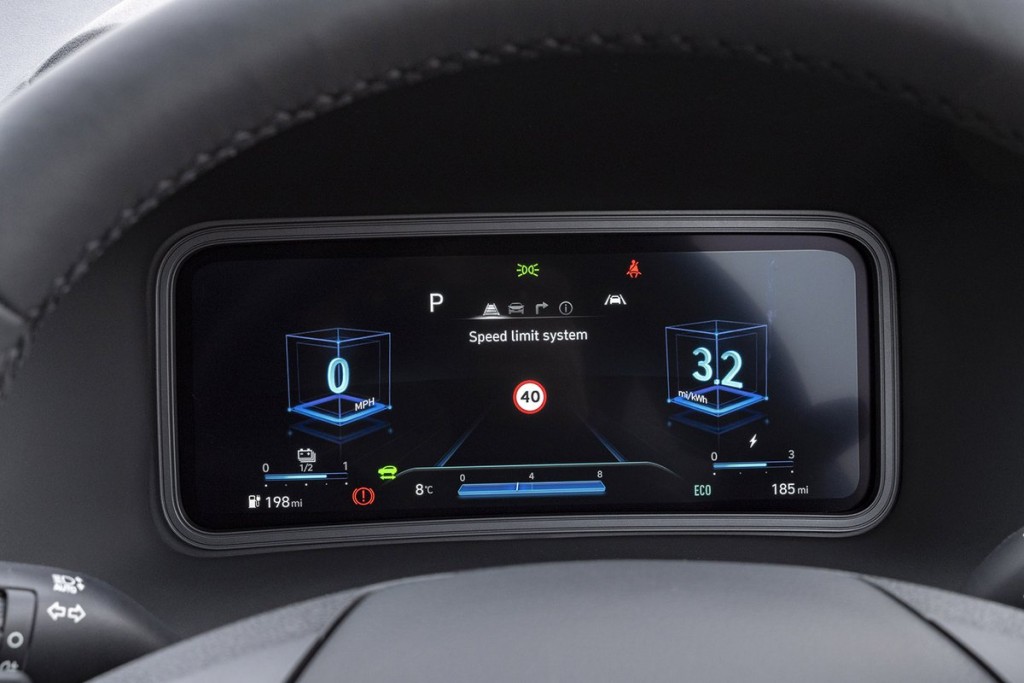 The driving position in the Kona is good and it’s easy to get comfortable thanks to the steering wheel which moves up and down. View out of the front is good and only mildly hindered by the portly windscreen pillars which may block your view at some junctions. Rear visibility is less commendable due to wide rear pillars, but thankfully Hyundai has fitted a rear-view camera and parking sensors to get around this problem.

OK, but what about space? Is there enough room for me and the family?
In the front, tall people will have no trouble getting comfortable in the Kona electric. As for the back, there is less room but even if you are six-foot-tall you should be able to find a good seating position. That said, the Kia e-Niro, Volkswagen ID3 and MG ZS EV all provide more leg and head room by comparison. 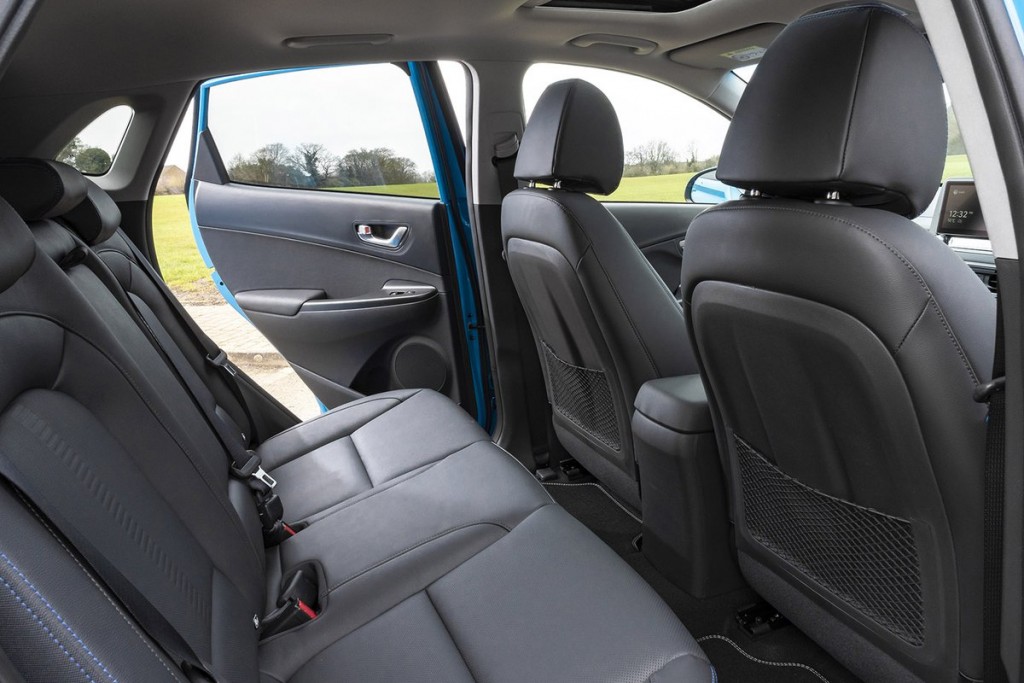 What about the boot? Sadly the Kona’s boot-space isn’t that great, with quite a shallow load bay. In this class, the Nissan Leaf is the electric car of choice if boot space is a priority. 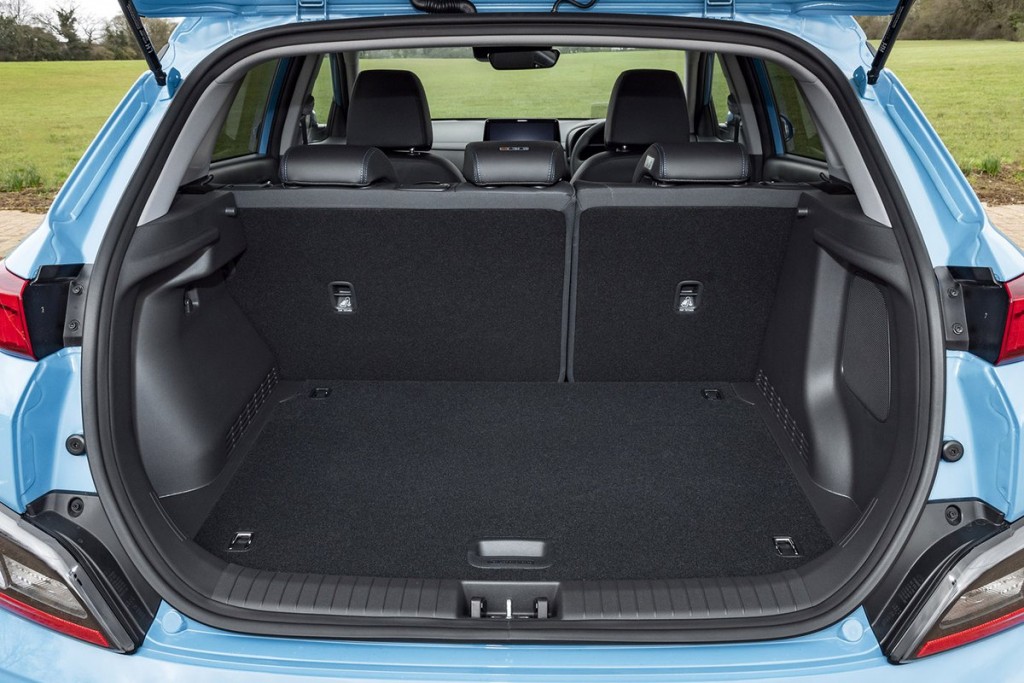 What rivals should I consider?
The clearest competitor to the Kona is the closely related Kia e-Niro, one of Move Electric’s favourite electric cars. The e-Niro offers a comfortable and smooth driving experience that feels similar to that of a combustion engined car. It’s perhaps slightly more versatile and rounded than the Kona Electric, but it’s 282-mile range is a little shorter. 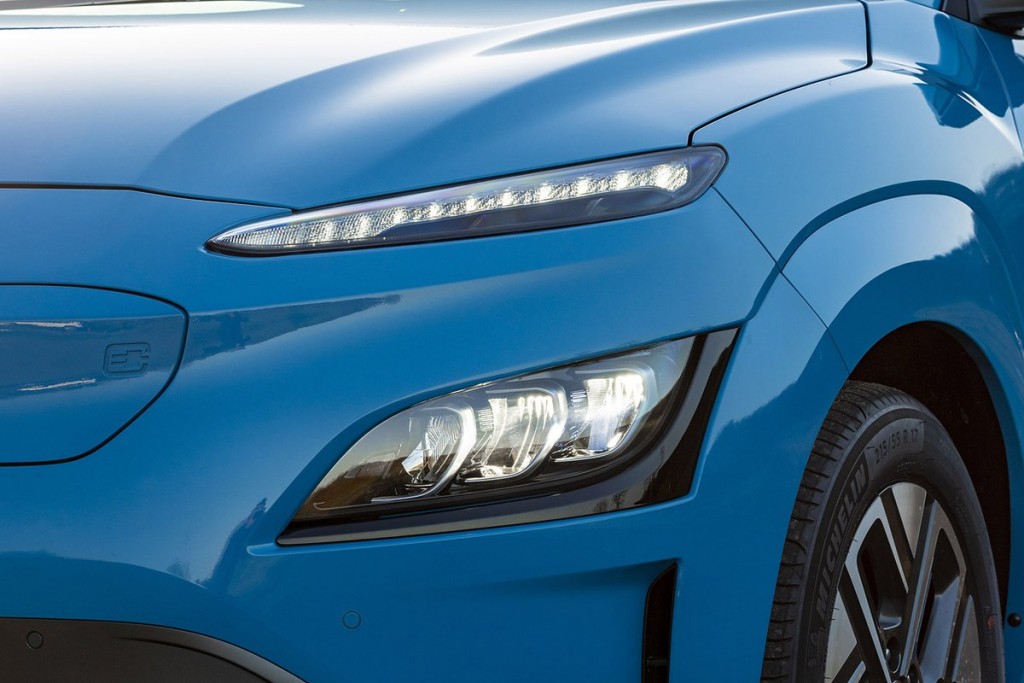 Another alternative is the Volkswagen ID3. The boldly styled and spacious ID3 might be closer in shape to a hatch, but these days there’s little to separate them from crossovers. Opt for the larger 77kWh battery and you get a claimed range of up to 336 miles, which is a commendable figure for a car of that size. Inside the ID3 is where the VW misses the mark. The minimalist interior is dominated by a slightly fiddly touchscreen, and those switching from an ICE car will find themselves more at home in the Kona.

Other cars you may want to consider are the Nissan Leaf, although it’s not as nice to drive as the Kona Electric. You could go for a smaller EV, in which case the Peugeot e-208 and Renault Zoe are worth considering.

Verdict
What it may lack in interior quality and practicality, the Kona Electric certainly makes up for it with its commendable range and zippy performance. Granted, it’s not the most spacious and might not handle as well as the e-Niro, but as a complete package, the Kona Electric is an appealing and stylish choice for anyone making the switch to electrified motoring. 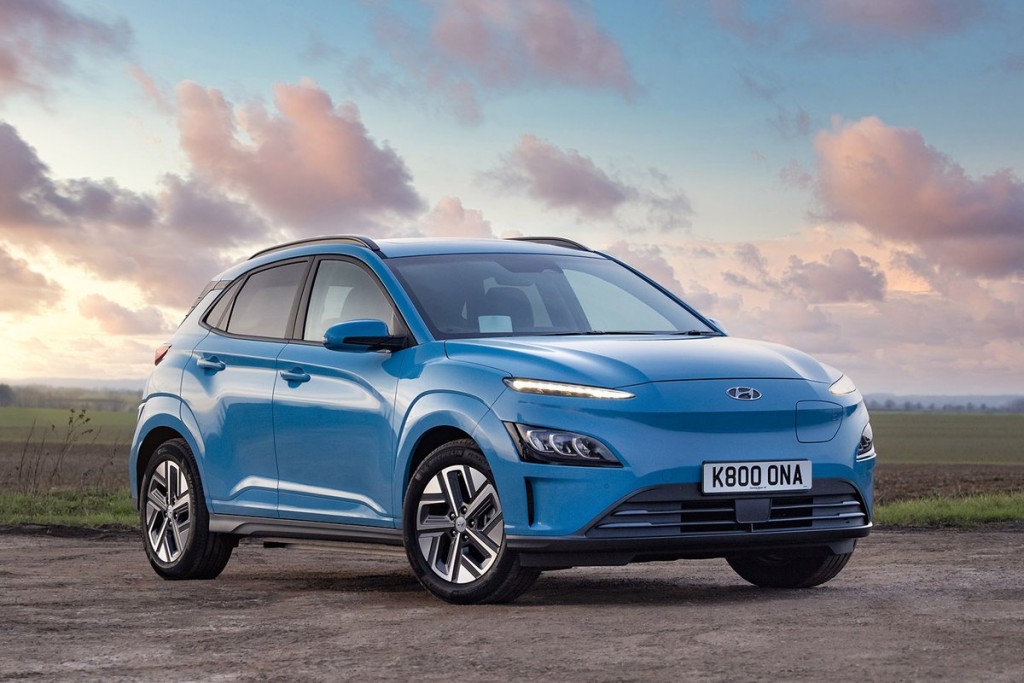