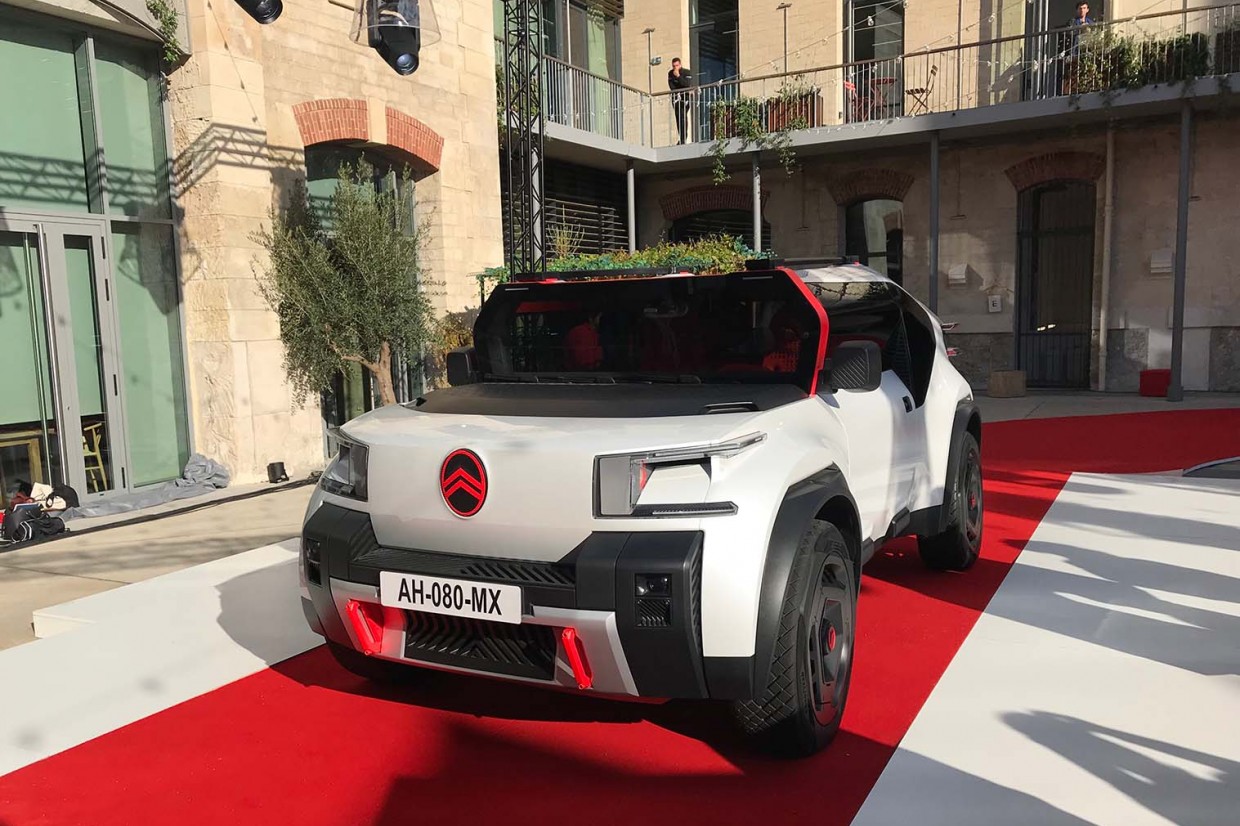 The Citroën Oli has been unveiled with the striking adventure-orientated electric concept car showcasing what the French marque eyes as the future of affordable electric transportation.

Citroën’s newest concept car takes the form of a rugged off-road inspired EV, with the firm claiming that the Oli isn’t a car, but a “lifestyle enabler’ and a “multi-purpose everyday extension to your life”. 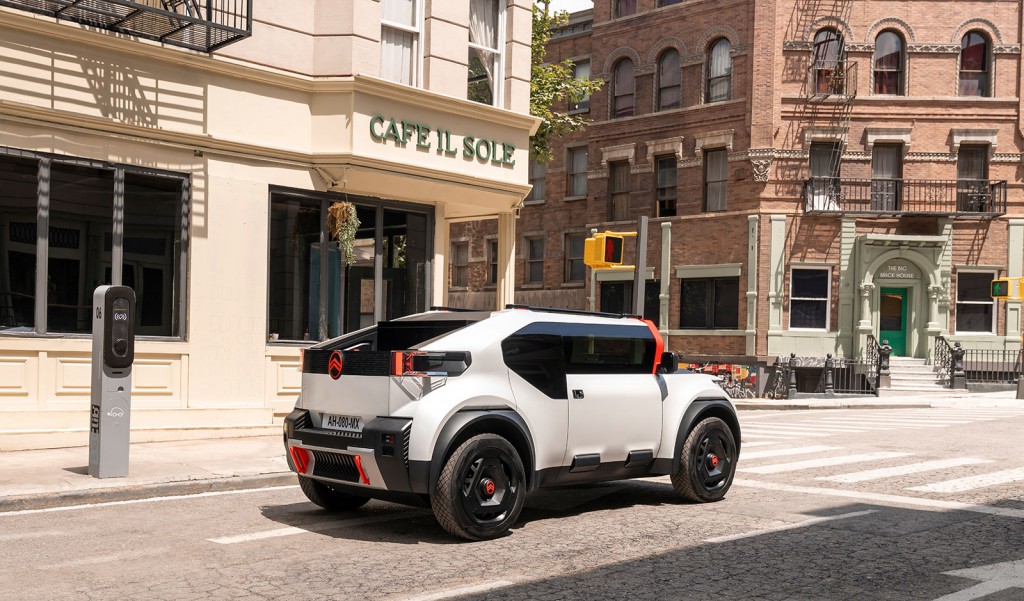 The Oli won’t actually make production - much to our disappointment - but has been created to set out the firm’s ideas for its future line-up, showcasing what Citroën aims to create within the sphere of electric mobility.

According to Citroën, the concept highlights the need to create lightweight, uncomplicated and affordable electric cars.

It might look more cumbersome in its design, but the Oli does in fact have a target weight of just 1000kg - which for an EV is impressive. This, as Citroën claims, means batteries need only be small, with the Oli featuring a 40kWh unit and a target range of up to 400km (249 miles). 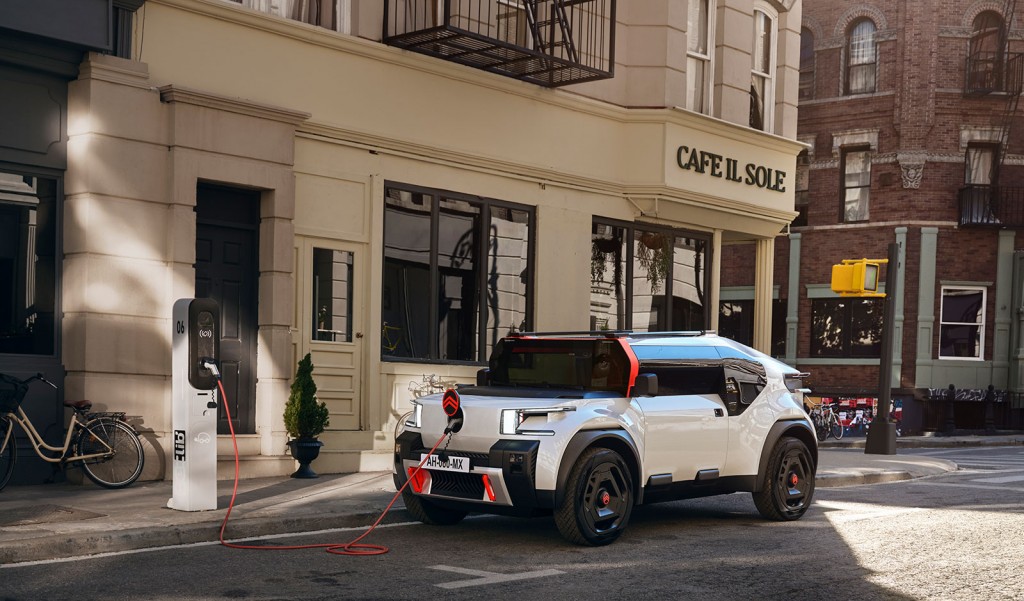 Citroën says the Oli can be charged from 20-80% in just 23 minutes - although this is a target rather than an official figure.

Alongside its new concept, Citroën has revealed a new logo design. The classic chevron's are now encompassed in an oval, harking back to the logo used on the firm's models in 1919. On the Oli the logo hides the cars charging port. 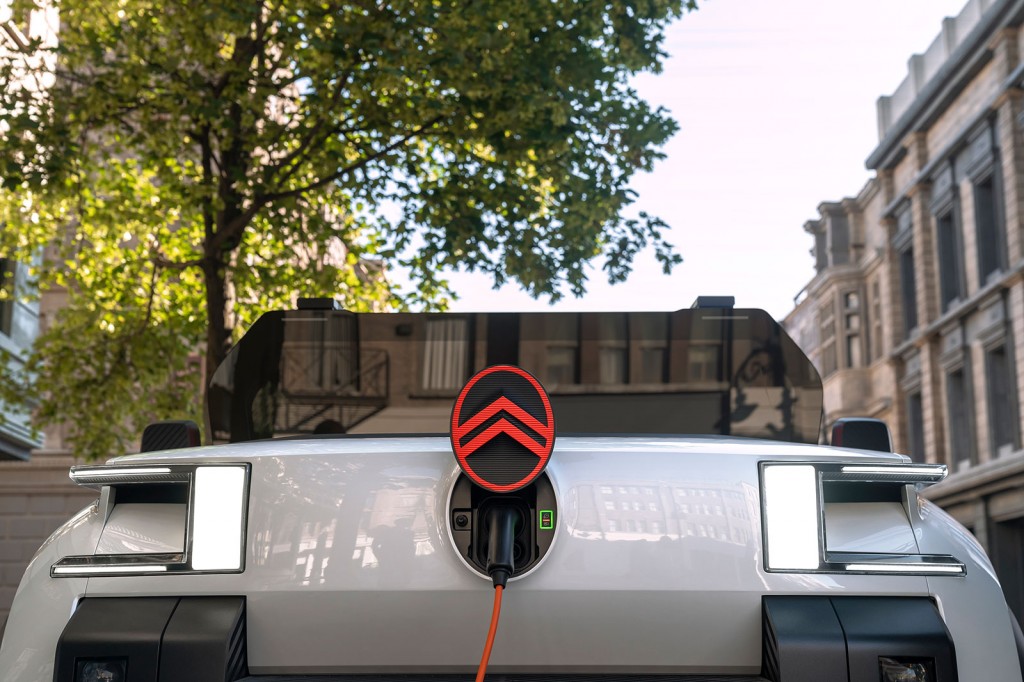 There’s no denying that the Oli is one of the most striking and bold concepts we’ve seen - then again the Dacia Manifesto concept was pretty wild too.

Measuring 4200mm long, 1650mm high and 1900mm wide, the Oli is similarly proportioned to a compact SUV. But as Citroën explains, the car doesn’t fall into a specific segment, adding that the Oli is a “workmate, family limo, urban explorer and adventure vehicle”.

“We’re not afraid to show you how the vehicle is put together, so you can see frames, screws and hinges,” said Citroën head of design, Pierre Leclercq. “Embracing purity allows us to design differently and challenge everything. It’s like taking an analogue approach to many things that have become digital today,”

The Oli does away with conventional car design, instead adopting more angular, flat surfaces. Take the front windscreen which is vertical and narrow, therefore using less glass and reducing the overall weight of the vehicle.

Wannabe aerodynamicists may be thinking that such a design isn’t best for efficiency and they would be right. To solve this issue, Citroën has added what it is calling an experimental ‘Aero Duct system” which helps to flow air through the front of the car and up through a gap in the bonnet. 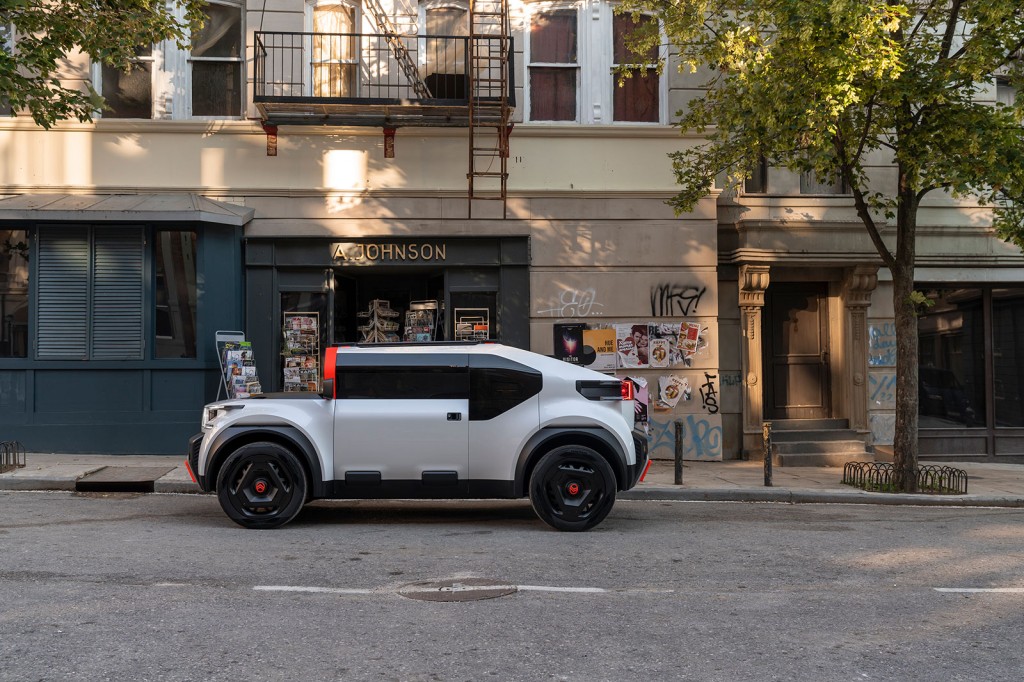 The front and rear bumpers are identical, like the tiny Citroën Ami, while the doors share similarities with the quadricycle. Citroën says it has saved 20% in weight per door by reducing complexity and simplifying the door design.

To allow for easier ingress and egress, the Oli uses suicide doors which feature a passive air intake to allow for greater ventialation in the rear of the cabin.

In its quest to maintain its lightweight character, some of the Oli’s panels are made from  - wait for it - cardboard. Yes, cardboard. 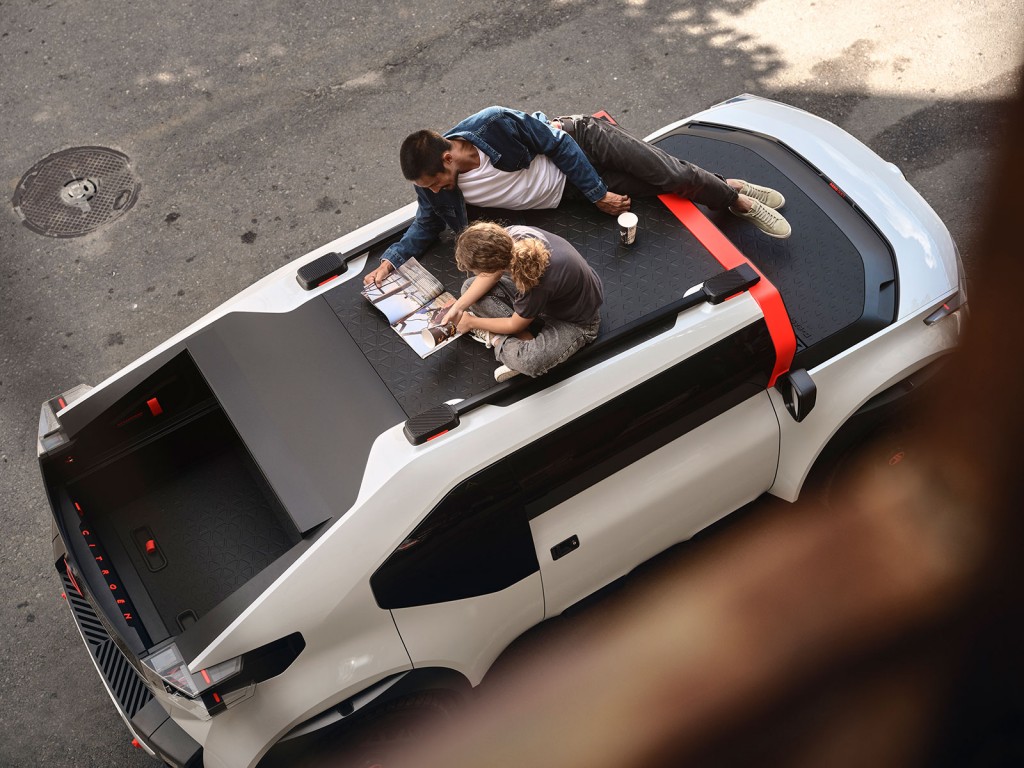 Made by partner BASF, the body panels are formed using recycled corrugated cardboard formed into a honeycomb sandwich structure which sits between two fibreglass panels.

The material is then coated in a protective tough resin making the panels such strong and yet lightweight. In fact it was so strong we were able to sit on the car itself. And its quirks don’t just end with the materials, as the Oli has another trick up its sleeve in the form of a pick-up truck-styled rear deck and boot.

By raising the rear glass screen upwards towards the rear deck and folding a panel behind the rear seats down, the Oli is transformed into a pick-up with a 994mm wide load bed. And to make loading easier the concept has been fitted with a tailgate. 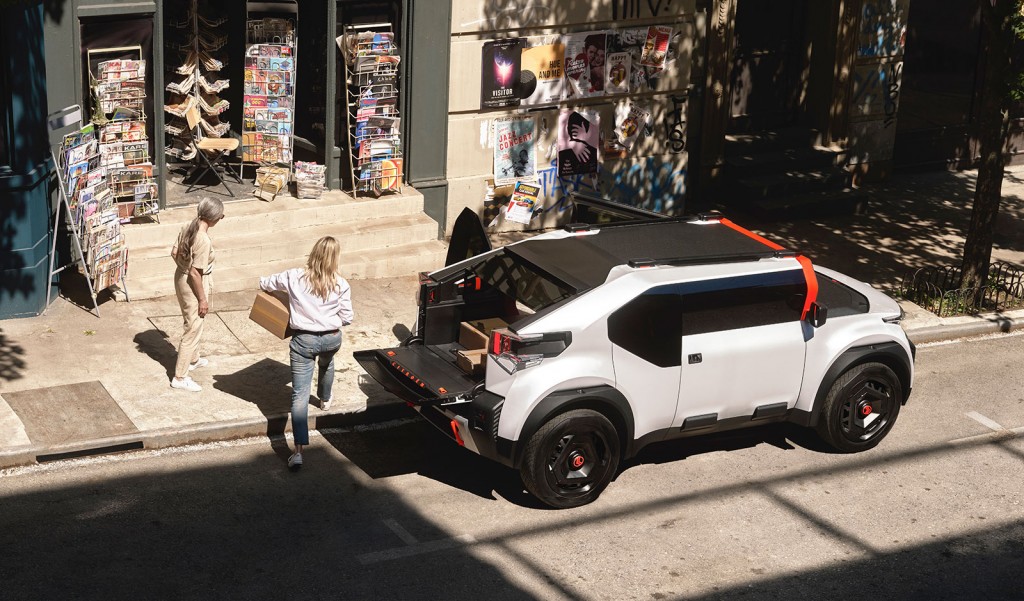 Don’t think that Citroën’s future ideas end with the exterior design. The cabin itself previews just how far Citroën are willing to go to keep costs and weight to a minimum. Oh, and how much they like the colour orange.

Opting for a more minimalist approach, the Oli dashboard does away with large screens and hidden computers and istead features a single bean running across the width of the car. 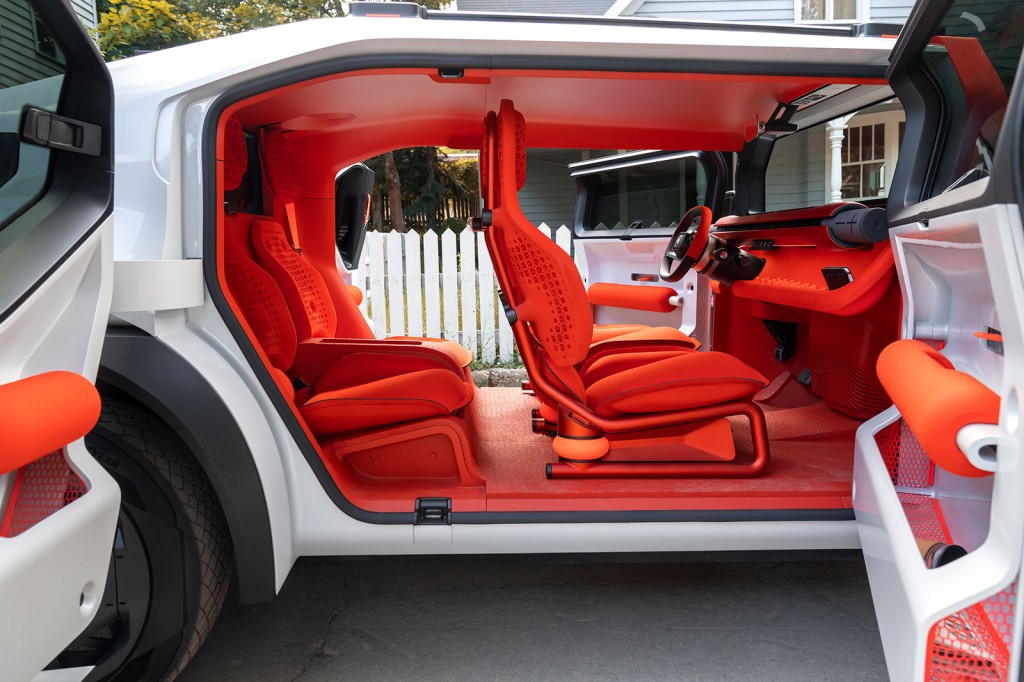 Within the dashboard the car has a smartphone dock, five toggle switches and an air conditioning system. Citroën says the Oli uses just 34 parts in the dash instead of around 75 when compared to a family hatchback.

Want to dive deeper into electric mobility? Sign-up to our Newsletter

Citroën has intelligently added a ‘Smartband’ system which projects information on the car across the lower windscreen, removing the need for an instrument cluster. Like the Ami, the Oli uses portable speakers instead of integrating a sound system into the car. 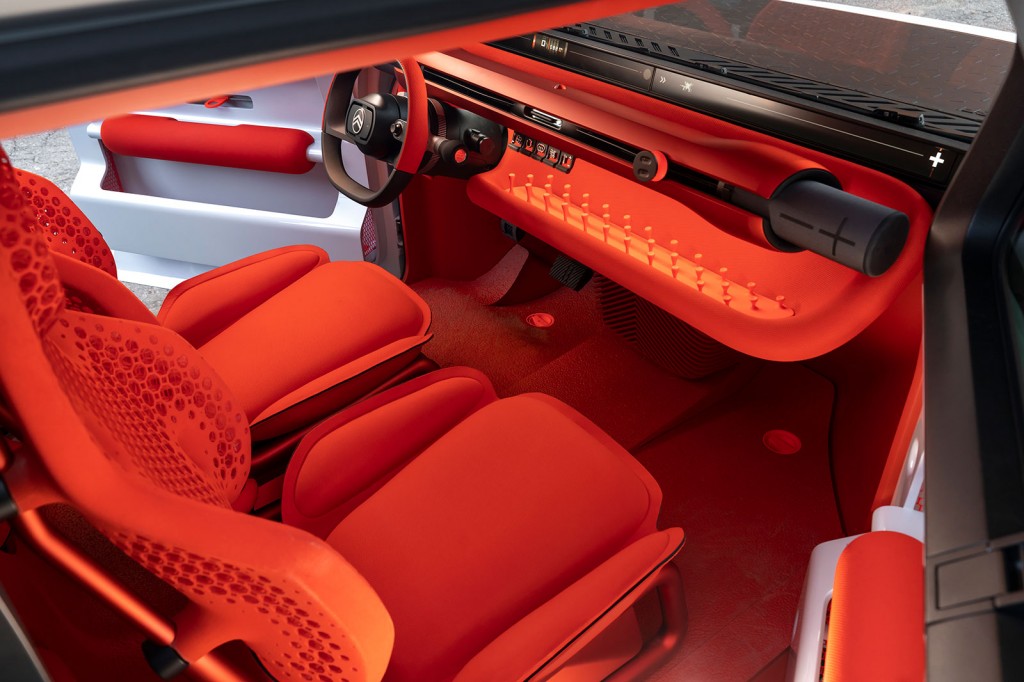 A more notable feature inside the Oli are its seats, which have been created using a 3D printer. The seat cushions are covered in a 100% recyclable material, while the back and head rests are made in partnership with BASF. The mesh-like seats are made from polyurethane which has been covered in an orange coating to add colour to the interior - and like the cushions it too can be recycled.

Citroen has also added a small isolation ring to the bottom of its seats which act to absorb road imperfections and vibrations. They too are made from recyclable plastic. 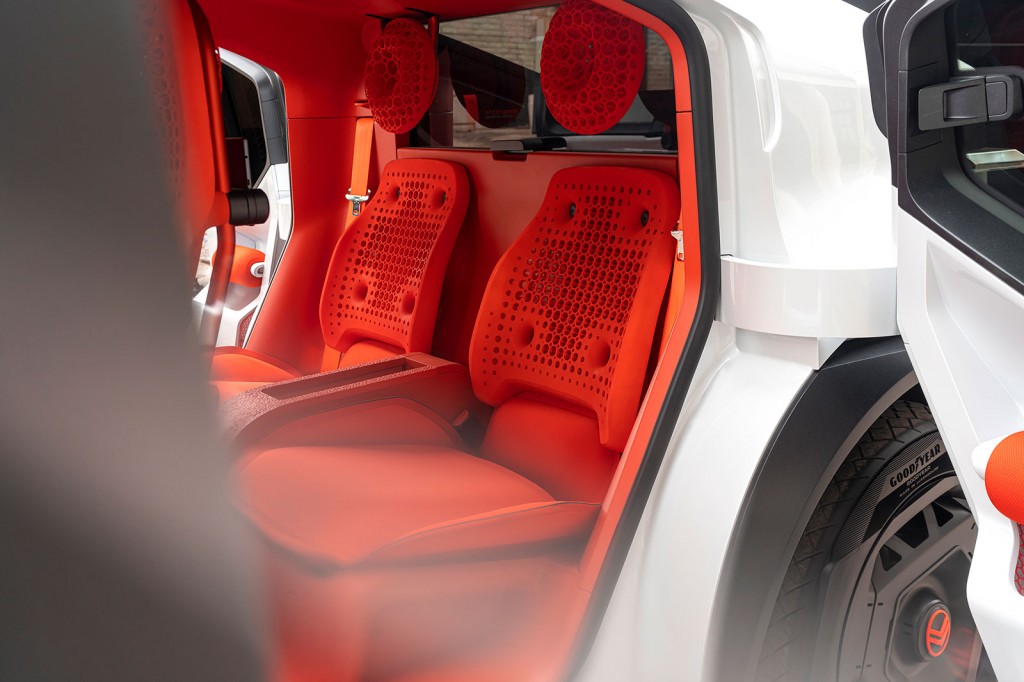 “The construction of the front seats is completely understandable,” Pierre Sabas, head of Citroën advanced design and concept vehicles.

“They are easy to dismantle, remove and recycle when you want to change the colour for example. Nothing is covered up, and there are no hidden structures - they are as straightforward as they look and a perfect example of how functionality and purity drove every element of the design.”

In keeping with the recycled theme of the cabin, the floor - which is also made by partner BASF - is created using expanded thermoplastic polyurethane (E-TPU). The foam like material is lighter and stronger according to its makers, while also being fully customisable in terms of colour. 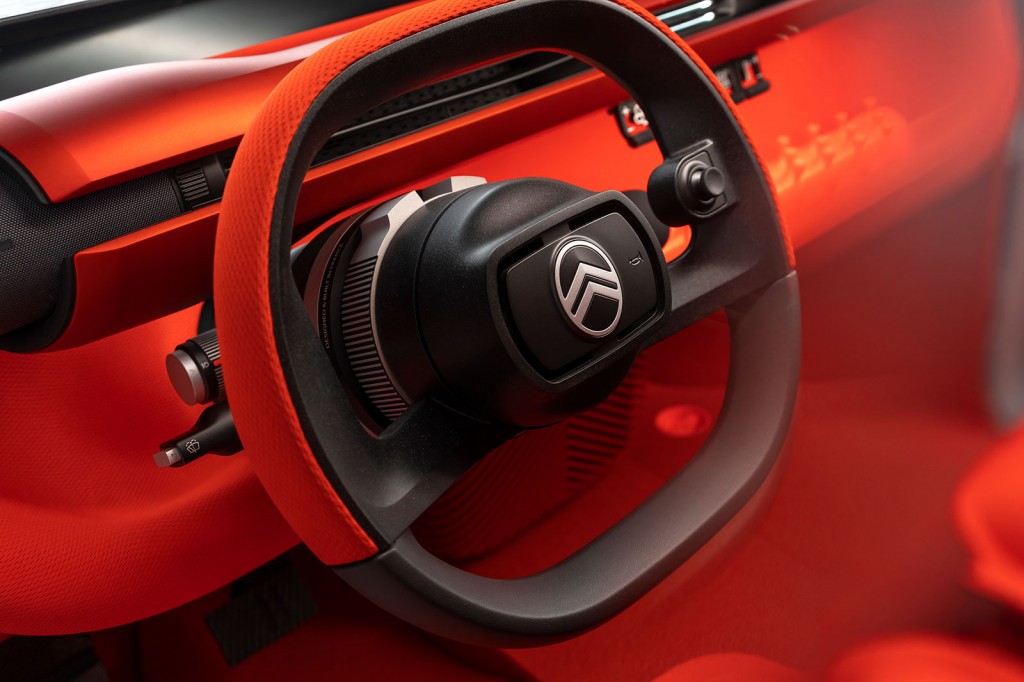 Anything else I should know about?

Like many new EVs on sale today, the concept has Vehicle to Load (V2L) capabilities, allowing owners to charge appliances using the Oli’s 40kWh battery. Citroën says the car can theoretically provide power to a 3000W electric device for around 12 hours.

The Oli also supports smart Vehicle to Grid (V2G) charging, meaning electricity from the car’s battery can be sold back to the grid when demand is high.

Citroën has equipped the concept with 20-inch aluminium-and-steel wheels which reduce the Oli's overall weight by 6kg. The wheels get fresh Goodyear Eagle Go tyres, that should last up to 500,000km (310,000 miles) and are made using renewable materials.